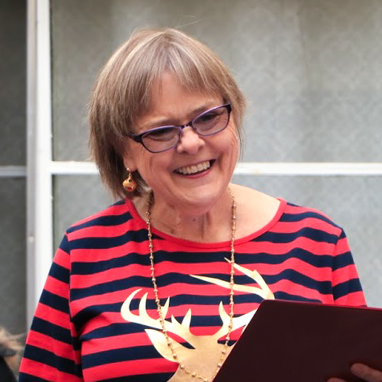 Ms. Gibson has spent her career combining the arts and community service. Originally a music major at California State University Fullerton, she was bit by the theatrical bug when she was asked to write music to accompany an art exhibit and dramatic reading of the “Rime of the Ancient Mariner” at a small gallery in Orange County California. She went on to become a professional stage manager and event producer for a number of shows in Los Angeles. Her passion for special events led her to establish a production company that provided management, lighting, and sound for large events such as the annual Religious Education Congress at the Anaheim Convention Center.

Universal Studios, Hollywood, was her home for several years where she served as a stage manager, project manager, show supervisor, and co-founder of the Special Events department. Following her time at Universal, she became the Executive Director of Zephyr: Voices Unbound, a professional 12-voice ensemble. The group performed in Los Angeles, Orange and San Diego Counties, sang under legendary producer George Martin at the Hollywood Bowl as part of a Beatles celebration, and toured the United States with “Voices of Light,” a multi-media production that featured Anonymous 4 and the Los Angeles Mozart Orchestra.